You are here: Home1 / Webinar: “Homeownership and possession: from expropriators to expropri...

Purpose: Homeownership has been a cornerstone of a universal and secure access to housing since the beginning of the 19th century, providing freedom and other benefits. However, since then it has not always been respected by the State, which has been specially the case under communist regimes during the 20th and the 21st centuries that have perpetrated all sorts of expropriations that in some cases have ended up in returning properties after the fall of certain regimes in Central and East European countries. In addition, the 2007 GFC started a period of economic and financial crisis that has stroke housing, including a share of mortgaged households, revealing that full homeownership is not always a safe shore. Those affected by housing exclusion are facing a process of a progressive precarization of their housing tenures that includes a more stringent rules to access to mortgage credit (in the European Union since Directive 2014/17/UE), less affordable tenancies (as a consequence of the former and the process of urbanization), underdeveloped intermediate housing tenures and insufficient public and social housing. In this context, squatting and other possessors without title have increased in many countries. This webinar covers the effects of communism, squatting and possessors in human rights of ownership and housing in the context of the COVID19 crisis.

Dr. Grzegorz Matusik (University of Silesia, Poland): is doctor of law and legal attorney. In 2017-2019, he was legal attorney in the Solicitor’s Office of Republic of Poland (Prokuratoria Generalna Rzeczypospolitej Polskiej), where he represented State Treasury in many judicial proceedings and he prepared many legal opinions and recommendations (also as a amicus curiae in Polish Supreme Court). Author of the commentaries on Polish Civil Code provisions (inter alia on ownership and tenancy) and legal monographs: “Ownership of media transfer equipment and legal titles to land” (2011, 2013) and “Acquisitive Prescription of real estate by the State Treasury” (2020).

Title: “Restitution and privatization of real estate in Poland and the legal position of tenant”.

Abstract: The lecture will present the historical background and legal conditions of the nationalization of real estate in the post-war (World War II) period in Poland and their impact on the contemporary rules of using housing by tenants. The principles, conditions, and directions of post-war nationalization and expropriation were similar for all so-called Eastern Bloc (former states of “people’s democracy”). After political and legal transformation, most of these states adopted rules of reprivatization with respect to the principles of transitional justice. Poland is one of the countries that do not have such a regulation. It results in many judicial problems and legal disputes, which finally end up in the courts. It means that today in Poland there are many legal proceedings connected with the restitution of immovables unlawfully seized many years ago by the State (State Treasury). In these circumstances, the legal position of tenants in these real estates is unclear. It is not only a legal, but also a social problem.

Dr. Marc Roark (Southern University Law Center, USA). Prof. Roark is Louisiana Outside Counsel of Health and Ethics Professor of Law and Senior Fellow in the Indian Law and Policy Institute. Professor Roark writes in the areas of property, urban law, affordable housing law and policy, homelessness research, commercial law, and he is a board member for the Association of Law, Property and Society. He is also a Fulbright Specialist in the areas of housing and homelessness. His current projects consider the role of the state in responding to squatters, the role of the property system in shaping housing norms, and the impact of model Article 9 legislation on tribal economic development.

Abstract:Squatting is a global world wide response to the undersupply of affordable housing.  Prior to the Covid 19 Outbreak, Squatting presented multi-scalar challenges to states attempting to protect ownership while at the same time recognizing the dire need for flexible housing options that challenge property and ownership norms.  Much attention has been given to state action to limiting rights of eviction, but much less attention has been paid to squatters in housing and the rights of owners to reclaim their property in the face of the global pandemic.  In some jurisdictions, stay at home orders have complicated the matter, giving squatters a temporary reprieve from legal action that would otherwise leave them vulnerable to the pandemic. In others, squatters have been removed from property despite the non-use by owners during the pandemic period. This seminar focuses on the distinct challenges and legal issues that squatting presents in the year of Covid. It will look at how different jurisdictions from the global south, North America, and Europe have sought to balance the social well-ness for communities while preserving owner rights to property.

Dr. Alessandro Dinisi (University of Pisa): is doctor of law by the University of Pisa, Department of Law, Course of Legal Science, Private Law and researcher at the UNESCO Housing Chair of Rovira i Virgili University (URV). He has a Master Degree in Law (cum laude) at the University of Pisa. His PhD research aimed to investigate the institution of possession in the civil law, focusing on the housing exclusion cases protected at a European and international level (EU and ECHR). On the frame of his research, he has published some articles in national journals and participated in national and international conferences. His fields of research are property law, possession, right to housing, ECHR case-law and environmental private law.

Abstract: The presentation aims at providing an overview of the Italian set of civil law remedies involved in the housing stability protection of de facto living situations, in which the original or supervening absence of a property right over the house may lead to the occupier’s housing exclusion. Such an issue has become crucial after the health emergency of Covid-19, which has shown how the home represents an essential safety space not only for the occupiers’ economic security but also for their health interests.

Through the analysis of the multi-level constitutional notion of the right of housing (art. 2 Italian Constitution, art. 7 CFREU, art. 8 ECHR) as implemented by the European and national case-law, it would be possible to test the standard of protection guaranteed both by the ordinary civil law remedies and by the emergency legislation provided by the Government to contrast the pandemic, focusing on various housing cases, characterized by a different degree of exclusion and conflict (i.e. de facto cohabitation outside marriage, tenancy at risk of eviction, squatting).

With the moderation of Dr. Rosa Maria Garcia-Teruel, postdoctoral researcher at the UNESCO Housing Chair of Rovira i Virgili University (URV). 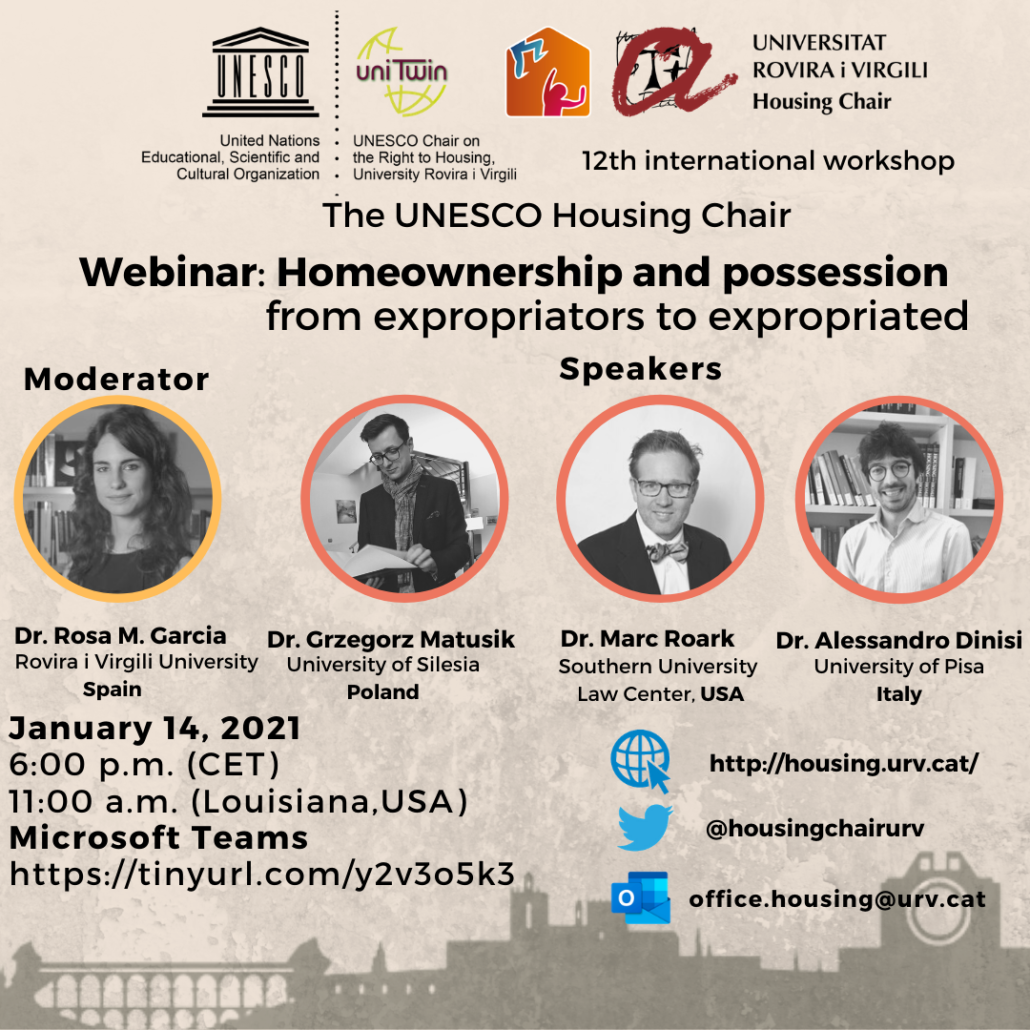