You are here: Home1 / Rambla Science 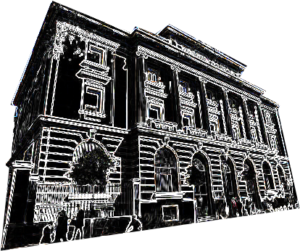 “Rambla Science. Rehabilitation of the old building of the Bank of Spain, for the creation of an international reference space for the co-creation and dissemination of science and the transfer of knowledge through creativity and discovery”. FEDER. Resolution PRE/1527/2019, 4th June, published at DOGC 7892 de 7-6-2019. Budget: 1,975,333.73 euros. Main researcher: Dr. Sergio Nasarre-Aznar.

Given the need to use emblematic buildings in the city of Tarragona, among which the Bank of Spain is one of the leading figures, Dr. Sergio Nasarre, as director of the UNESCO Housing Chair, contacted the Councilor for Education of Tarragona City Council, Mr. Francesc Roca, holding a first meeting as soon as 5 February 2018, with the idea of ​​promoting an innovative research transfer center at the former headquarters of the Bank of Spain on the Rambla Nova in Tarragona, that it collects, in part, some uses that had been given to it since the closure of the Bank, 15 years ago.

Immediately after several meetings, the need arose to articulate a good report on the project and to structure it through a European call to obtain the necessary funding to carry it out. To this end, we contacted the URV project writing assistance office, which was then run by the Tarragona Region of Knowledge Office, headed by Dr. Xavier Grau, from whom we obtained the support to obtain the help of Mr. Daniel Ferrer.

The team, now of three, formed a driving group that for 9 months would write the project, involving in this task up to 24 people until its presentation, who came from the Universitat Rovira i Virgili, the Ajuntament de Tarragona and from the four Research Institutes that we wanted to participate in the proposal and in the task of transfer of science that is done in Tarragona: IPHES, ICAC, ICIQ and IISPV.
After visiting a leading science transfer center in Dublin (Science Gallery), after visits to the building and several technical coordination meetings among the URV, the City Council and the Institutes, the report was presented in December 2018 and finally the requested grant of 1.9 million euros was awarded to Tarragona City Council by resolution of June 4, 2019.

In May 2019, the change of municipal council prevents Councilor Roca from continuing in the project driving group. On July 15, 2019, the Rector of the University, Dra. Mª José Figueras, decides that Dr. Nasarre should not continue to drive the project.

According to the report presented, the “Rambla Science” project is due to be completed in September 2021, at which time the center should open its doors. UPDATE (Nov. 2021): this deadline is missed and the whole project is put at risk (see web references below).

Briefly, the project envisages the rehabilitation of the old Bank of Spain building, to create an international benchmark space for the co-creation and dissemination of science and the transfer of knowledge through creativity and discovery.

The Rambla Science should become a Center for the discovery of the potential of the territory in the context of the present and future challenges of humanity (aligned, therefore, with the SDG 2030), of joint research, of social action, of exchange of ideas, of interdisciplinary and creative construction, of meeting point and personal development and generator of professional vocations. It was designed to develop actions that directly revert to society with economic, social and cultural benefits.

In the following video from December 2018, from the digital newspaper “The Czech Republic”, the essential elements of the project presented that month and year are explained at the Tarragona City Hall. The link is: https://www.facebook.com/watch/?v=753158185063351

January 2021. Announcement of works to begin in October 2021 https://www.diaridetarragona.com/tarragona/Las-obras-en-el-Banc-dEspanya-de-TGN-arrancaran-a-finales-de-octubre-20210129-0001.html

September 2021. The project at risk

October 2021. It is put under question that FEDER funds could be used for Rambla Science. Funds about to be lost.  https://larepublicacheca.cat/jordi-fortuny-sera-complicat-aprofitar-el-feder-pel-banc-despanya/

December 2021. It is confirmed that Tarragona City Council is losing the 2 million euros of the FEDER fund and the project is entrusted to the eventual obtaining of Next Generation funds. https://housing.urv.cat/wp-content/uploads/2021/12/Diari-de-Tarragona-18-12-2021.pdf

October 2022. The comptroller urges the closure of a municipal foundation created to boost science and the Rambla Science project due to inactivity (Diari de Tarragona, 16-10-2022).