Blog - Latest News
You are here: Home1 / News2 / Speeches3 / The amendment of the Urban Leases Act 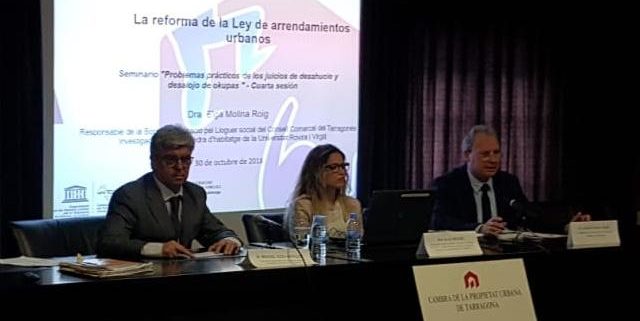 Dr. Elga Molina Roig delivered the conference “The amendment of the Urban Leases Act” last Tuesday, November 30. It was held in the Tarragona Chamber of Urban Property (Cambra de la Propietat Urbana de Tarragona), who organized it jointly with the Tarragona Law Bar (Il·lustre Col·legi d’Advocats de Tarragona) within the Seminar “Practical problems of eviction procedures”. Dr. Molina explained the draft laws that are currently being discussed in the Spanish Parliament as well as other proposals, such as the principles proposed by the Catalan Government (Generalitat de Catalunya). Moreover, all the proposals were compared with the regulation of urban leases in other European countries.

The UNESCO Housing Chair of University Rovira i Virgili takes part in the drafting...
Scroll to top